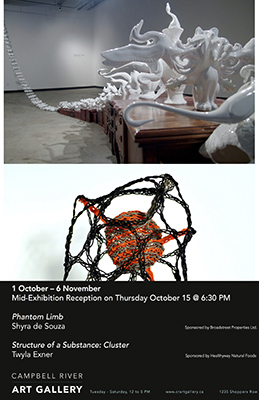 This porcelain installation is a corporeal representation of found objects that is at once familiar and alien, calling upon the viewer to combat their opposing desires in their physical and psychological relation to the work. Phantom Limb is large in scale, reminiscent of a dinosaur museum as well as a domestic display.

This work consists of a large central piece made of several smaller components, and arranged to emphasize the idealized, body-like structures.  The source of the forms are various decorative objects and trinkets, and their combination into masses and resurfacing the resulting sculptures.  Each item is added in such a way that they begin to erase one another, and take on forms reminiscent of mounted, overgrown deer antlers, or three-dimensional inkblots.  The resulting forms are then be combined and displayed in such a way the pieces appear to form a skeletal structure of an alien sort, implying familiar body forms in an unfamiliar composition.  Each piece will be carefully integrated into the overall structure over the first two months of the exhibition. (Written by the Artist).

Structure of a Substance: Cluster is an immersive installation using discarded telephone wires of both material and conceptual inspiration. The installation engages with many current social, political and environmental issues, but are also whimsical imaginings of an alternative ending for the residues of the electronic evolution.