The Meditative Aspects of Art – Part 2

John Cage was an American composer born in 1912. His masterful and highly influential piano composition 4’33 was famously performed by David Tudor in Woodstock, NY in 1952. It is a rumination on the core concepts of silence and chance operations. Over the period of his career John Cage was influenced by Zen, as well as texts like the Yi Jing. Silence was described by Cage as: “not the absence of sound but was the unintended operation of my nervous system and the circulation of my blood” (12). As I discussed above, the concept of nothing is full of potential in Eastern philosophical traditions. In the performance of 4’33, just as in Cage’s definition of silence, there is an inherent, bodily presence that surges to its own rhythms, creating chance sound arrangements.

David Tudor enters the stage of the Maverick Hall. He sits down at the piano and prepares to perform. He places a stop watch and sheet music in front of himself. Opening the cover of the piano, he places his hands in his lap. There he sits for a total of four minutes and thirty-three seconds, closing and reopening the cover to signal the beginning and end of three sections of the composition. He does not touch the keys, nor does any sound issue from the piano.

When this piece was first performed there was outrage from the artistic community over the absence of sound in what was supposed to be a musical composition. But, there wasn’t an absence of sound. The breath of the audience, the rustling of their bodies, a cough here or there, perhaps a delicate whirring of a fan; all sounds that occurred produced a completely unique atmospheric piece of art that could never be repeated in its exactitude. It recalls the effect caused when one focuses on the sounds around them as they practice total presence during mediation. This remains one of John Cage’s most influential pieces. It hinges on the concepts of chance and silence. Each performed interpretation is completely unique and subject to multiple elements of chance resulting from the sounds experienced during the performance. The nature of the piece is ephemeral and requires interpretation, physical and mental presence to be brought into existence. One may perform the score by freely interpreting its meaning anyway they see fit, leaving it open to near infinite possibilities.

The harmony and solace created by artworks that invoke a sense of awe and wonder in nature resound with the human spirit in a similar way as those motivated by the deeply studied features of spiritual pursuit and insight. Whether works of art originate from the Romantic or contemporary periods there is a history of a love of nature that seeks to understand and convey its awesome power and complexity, and relate the human position to its place within the greater scheme of being. The paintings of Caspar David Frederich are meant to inspire awe in the sublimity of nature. You look upon an often lone figure with their back to the viewer, absorbed by a natural landscape that invokes a sense of wonder. Friedrich famously once said “The artist should not only paint what he sees before him, but also what he sees within him” (13). In the presence of natural wonders humans feel small, but also connected to a greater whole, and the majesty of the natural world. It is easy to imagine yourself in the scene because you cannot see the face of the painted human subject. Therefore they become a stand-in for you, as you are transported into the scene and into the sublime. Similar to the other artworks discussed, we are left to create our own meaning and are drawn into a meditative state by the consideration of natural and mystical systems that expound upon the massiveness and complex nature of the cosmos and the world around us. Caspar David Frederich was a Romantic painter who often used nature as an allegorical subject to invoke deeper moral and spiritual meaning.

Studio Drift is a group of contemporary artists from the Netherlands. They create kinetic sculpture, and have been commissioned to design installations all over the world. Much like the paintings of Caspar David Frederich, their work inspires awe in nature, but does so through technology. Shylight is a kinetic installation of light and movement that evokes the grace and energy of flowers as they close at night to conserve resources and defend themselves. The sculpture is inspired by the natural and highly evolved process flowers undertake when opening and closing during what is called nyctinasty (14).

Having seen an exhibition of their work at the Stedelijk Museum in Amsterdam, I can easily say it was one of the most magical and awe inspiring art going experiences of my life. Being in the presence of these wonders of technology that seem to have their own life force caused me to meditate upon the complexity of nature, its poetics and rhythms, and my place, however small, within that wondrously complex system. I would highly encourage you to watch the video of the artwork itself in order to witness the effects that it creates during movement:

The phenomenal possibilities of art in this current age are poignantly expressed by artists like those of Studio Drift. They can create programs, circuitry, and materials that so closely mimic the minute and nearly undetectable processes of nature for the human eye and in controlled circumstances, so we may become voyeurs of some of the most awesome and wondrous effects that the natural world employs.

The contemplative nature of humans is expressed in powerful ways through visual art. Spanning spiritual and secular experiences through hand derived and highly advanced mechanical processes, meditative artworks have the capacity to transport us into a realm of thoughtful introspection. By engaging in the process of creation or slow looking, the mindful act of focusing on what an artwork can offer through the pursuit of meaning and self-exploration is a worthwhile endeavour that anyone can engage in. I hope you are titillated by the examples presented in this discussion and inspired to seek your own experiences. Though we may feel restricted in our movements at this time, we still have access to the boundless reaches of the human imagination and the infinity of the cosmos that continues to motivate our philosophical search for meaning. 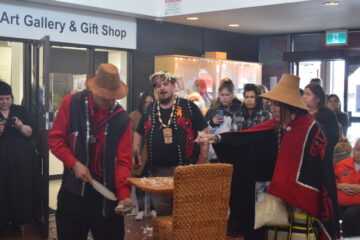 Thank to everyone who attended yesterday’s Opening Reception for Distant Relatives. What an incredible and impactful event, thank you to everyone coming with open ears and open hearts. We are incredibly honored to be holding Read more… 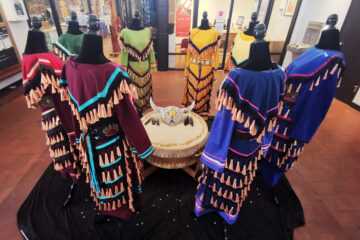 Indigenous jingle dresses now on display at The CRAG

On display at the Campbell River Art Gallery until the end of March 2022, Noojim Owin, the Jingle Dance Healing Dance, is a community cultural revitalization project. 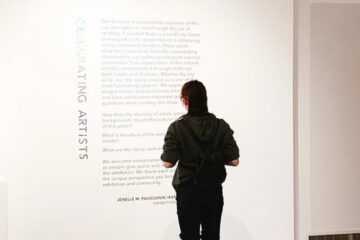 Translations by Jamelie Hassan & Soheila Esfahani–curated by Jenelle M. Pasiechnik, was the first exhibition after the pandemic shutdown, at the Campbell River Art Gallery. Like many events in 2020, the exhibition-which was originally supposed Read more…